Columbia School Board candidate Jonathan Sessions answers a question from the moderator Wednesday at a candidate forum at Paxton Keeley Elementary School. Other candidates are, from left, Chris Horn, David Seamon and Helen Wade. [DON SHRUBSHELL/TRIBUNE]

Two members of the Columbia Board of Education seemed caught off-guard Thursday night when they were asked about the propriety of district employees operating a side business as education consultants.
Board President Helen Wade and member Jonathan Sessions were taking part in a candidate forum with challengers Chris Horn and David Seamon when the question, written by one of the 25 people on hand, was asked.
The forum at Paxton-Keeley Elementary School was presented by the Columbia Missouri National Education Association, the teachers’ union. The four candidates are competing for three seats in the April 7 election.
No names were given, but Jill Brown, assistant superintendent for elementary education, and Jana Schmidt, elementary language arts coordinator, operate Brown & Schmidt Consulting, an educational consulting firm.
The company was formed in late 2018, according to records at the Missouri Secretary of State’s office.
“That is a tough question,” Sessions said. “There are a lot of moving parts. It does raise concerns.”
Wade said it sounded as if the question referred to a specific individual.
“If there’s a thing that influences the decision making or analysis of our administrators other than what’s best for students, that’s a problem,” Wade said. “It may not be a conflict of interest.”
The challengers said the question needs more investigation.
“That does raise a lot of questions,” Seamon said.
Horn agreed that a closer look is needed.
“Anytime there’s a potential conflict of interest, it needs to be explored,” Horn said.
Neither Brown nor Schmidt could be reached for comment on their outside work.
Brown & Schmidt Consulting has no contracts with the school district and does no work with the district, said district spokeswoman Michelle Baumstark in an email on Friday.


There is no conflict because employees can work outside of their employment, Baumstark wrote.
In their contracts provided by Baumstark, Brown is paid $159,000 and Schmidt $97,380. Nothing in the simple, one-page contracts prohibits outside employment.
The election this year is the first since the union and the district had a difficult negotiation over the teachers’ contracts.
Wade and Sessions were on the school board last year when the board’s negotiators threatened to end its recognition of the teachers’ union as the exclusive representative of teachers based on a challenged state law.
The union successfully sued to retain the recognition.
On Thursday night, there was no evidence of lingering tension between the incumbent board members and the union teachers during the forum.
There was a communication between board members and union leaders and teachers that showed some disagreement between the incumbents and the challengers.
Sessions and Wade said they couldn’t talk with the union president about issues being negotiated, but anything else was OK. They put no restrictions on teachers’ conversations with teachers.
“There is lots more than what is being discussed in collective bargaining,” Wade said.
Horn and Seamon placed no restrictions on communication with the union president or teachers.
“Really what we’re talking about is building relationships,” Horn said. “We all have the same goal. We’re all here to support our kids and the community.”
All the candidates agreed that the district is correct to oppose charter schools or voucher programs that would use public money to support private school education.
The question mentioned Education Secretary Betsy DeVos’ recent visit to Jefferson City to promote tax credits to pay for scholarships for students to attend private schools.
“This is a real issue,” Wade said. “This isn’t pretend anymore.”
Charter schools and vouchers divert public dollars to schools that aren’t accountable to anyone, Wade said.
“It’s not something we can allow to happen,” Wade said.
Horn said the push for charter schools or vouchers infringes on local control of education.
“This is a threat,” Horn said of charter schools. “We don’t need them. We don’t want them.”
Sessions said he had testified against the educational tax credits in Jefferson City.
“I am personally 100 percent against charter schools and vouchers no matter what you call them,” he said.
Seamon said he, too was strongly against efforts to divert public funds to charter schools or private schools.

Posted by Columbia MNEA PAC at 11:52 AM No comments:

CMNEA School Board Forum this Thursday 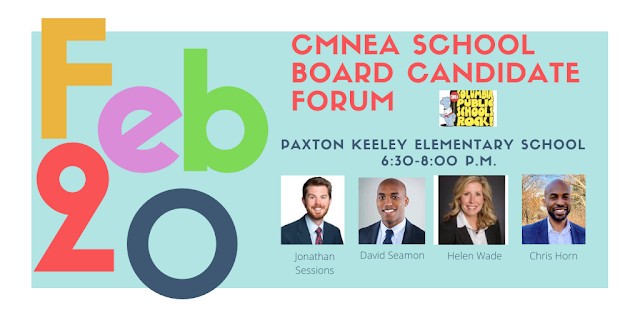 Posted by Columbia MNEA PAC at 10:47 AM No comments:

Four Candidates for the Columbia Public School Board File

CMNEA members and the Columbia community enter into the 2020 election season with the CPS school board elections. Filing began Dec. 17, 2019 and will end January 21, 2020. These are the candidates who have filed so far:

Return soon to learn when CMNEA will host our screening AND our public forum, as well as posting responses from CPS school board candidates. Remember, you must register to vote or make your address changes by March 10th in order to vote in the April 7th elections.
Posted by Columbia MNEA PAC at 12:50 PM No comments:

39 out of 39 precincts counted
CMNEA thanks ALL members and community members who helped by attending our forum and other candidate forums, educated others, wrote letters and wrote post cards, and put signs up in their yards. We have two wonderful new members on the board who will be strong advocates for our students, our community AND for public education!

We also thank all three candidates for running positive campaigns. There was no name calling or attaching a candidates character. Jay Atkins, Blake Willoughby and Della Streaty-Wilhoit showed nothing but respect for each other. We greatly appreciate the positive campaign.

This Monday, April 8th, Mr. Willoughby and Dr. Streaty-Wilhoit will be sworn in as Columbia Public School board members. Come to the Aslin Building at 6:30 p.m. to show your continued support!
Posted by Columbia MNEA PAC at 10:35 AM No comments:

Good morning all my friends in Columbia. I’ve been keeping a very close eye on the race for School Board. Even though I’m no longer in town, I do still care very deeply for the community and in particular, the children in Columbia. For that reason I find it important to share my opinion on the race.

First, please DO NOT vote for me. As I am over 400 miles away, I can no longer serve the community, so voting for me would actually hurt other deserving candidates.

Second, please exercise your right to use BOTH of your votes. There are 2 open seats, please use your voice to fill both of them.

Finally, please vote for Blake Willoughby and Dr. Della Streaty-Wilhoit for School Board. I’ve had several opportunities to speak to and work with both, and they both truly care about equity and having an inclusive Columbia School District! I thank you all dearly for supporting me, and now I ask that you support Blake and Della for School Board.

Thanks and I miss you all dearly. Please go make a difference April 2!!!
Posted by Columbia MNEA PAC at 9:10 AM No comments: 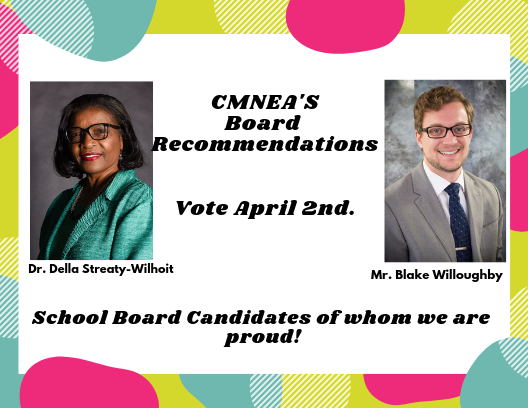 Posted by Columbia MNEA PAC at 5:51 PM No comments:

Know Our School Board Candidate's Positions on the Issues

The Missourian submitted a list of 10 standardized
questions to the three candidates for Columbia School Board.

Posted by Columbia MNEA PAC at 4:42 PM No comments:

Information about Voting in Columbia/Boone County